Pretty much every RPG makes use of battle encounters as its primary gameplay mechanic. In some RPGs, battles are the only real gameplay in the whole game—I’ve seen lots of games where the whole purpose of walking around on some maps is to just go from one battle to another. Most of the time, your characters’ skills, stats, items, etc are all based around their uses in battle. The battle system is the core of nearly every RPG, but it seems like lots of RPG designers put relatively little thought into the battles themselves.

There are lots of ways to handle RPG battles; not just the battle system itself, but even elements of the game that surround and connect to them. This article is going to cover some aspects of battle systems that deserve more thought than RPG designers may realize.

Most battles happen on a different screen than the regular map screen: the player will encounter a monster and the entire perspective of the game will shift. This disconnect between map exploration and battle scenarios is a trademark of 2D RPGs. There’s more than one way to initiate these encounters; and the different possibilities have their own strengths and weaknesses.

The default encounter type (and by far the most popular) in RPG Maker is the random encounter. There are some notable disadvantages to this; mainly in that it can cause tremendous frustration for the player. If he’s trying to get somewhere, the monster encounters are just going to be getting in his way. If he wants to grind, then he needs to walk around in circles waiting for a monster. 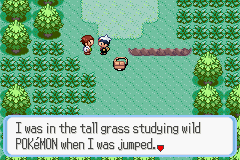 Pokémon uses random encounters, but they can be avoided by staying out of the grass.

The alternative is to have the enemies visible roaming around the map; when they bump into the player, the battle starts. This method adds an extra gameplay scenario as the player dodges or races monsters on the map. It does have its own difficulties: it requires more unique monster sprites and some amount of balancing is required when it comes to monster placement and respawning.

Don’t feel limited by those two methods; you can use one of them and put your own tweak on it to add to the gameplay, or you can come up with other ways—for example, battles that are only triggered via story events. I would strongly suggest that you don’t use a mixture of the two primary methods: a player will get easily confused and overwhelmed if some battles are initiated randomly while others are represented on the map. That’s the kind of inconsistency that we should avoid in game design.

Whichever approach you take, you should make sure to incorporate it into the battle itself. For example, if you use on-map encounters, there are a bunch of things that you can do that take advantage of the system. Here’s an easy example: first strikes. If the player sneaks up behind the monster, he has initiative in battle; but if the monster gets the player from behind, the enemies have the initiative. You could even do more with the events on the map: instead of having the monster reward an item or gold in the battle screen, maybe the monster sprite can turn into a  treasure chest after it is defeated.

It’s a little more difficult to find ways to make random encounters more interesting. At the very least; taking an approach similar to the Pokémon tall-grass example would be able to circumvent a lot of player frustration. You can also have items, skills or equipment that change the rate of encounters. If the player has more control over these, he will be less likely to get frustrated and blame the designer. I’ve also seen games that feature an “encounter rate meter” or some sort; so the player has a visual clue that lets him know when to expect the next battle. Just make sure that whatever you do, your encounter rates aren’t too high or too random. There is nothing worse than being bombarded with random battles after taking only one or two steps.

What you’re doing wrong: not incorporating the encounter method into the battles and the rest of the game.

This is something that game designers will talk about a lot: many RPG Maker users will be proud to admit that they put a lot of work into making their battles difficult and force the player to use strategy. They don’t want the player to be able to “just press attack” to get through the whole battle. That’s awesome; it’s a good start.

Unfortunately, it isn’t always the best option. While that’s great for most battles, you need to be able to balance that with the fact that the player will be getting into a lot of battles. If each battle requires a lot of strategy while the player figures out the best method to defeat the enemy; and how to best spend his MP, etc—then the player will quickly become frustrated.

Remember the player’s goal in each section of your game. For example, if the player is trying to solve a puzzle within a dungeon, throwing a bunch of difficult battles at him is only going to get in the way of that goal. In fact, by the time he has gone through five or six tough fights, he might not even remember what the original goal was. In places with specific goals that demand the player’s attention, you might want to set a very low encounter rate, or possibly no encounters at all. Let’s face it: sometimes battles just get in the way.

You shall not pass! Oh wait—Gandalf said that to the monster.

Battle difficulty and complexity can be good; but that has to be balanced with the amount of battles. Remember that the most valuable thing to a player is his time. If your battles are too long, then the player will get frustrated. If your battles come about too often, he’ll also get frustrated.  If you want your game to include complex and difficult battles, there should be less of them. If your game’s battles are more about brute strength and grinding through, then you can have a little more. If—like most games—you have some of each, you’re going to need to do a bit of testing to find the perfect ratio. It’s important to settle on a balance somewhere in the middle. And remember—if you have to, err on the side of making things easier for the players. If you want your player to get through your game to enjoy your oh-so-awesome story twists, then don’t make it a chore for him to get there.

What you’re doing wrong: stalling the player when he wants to progress through your game.

A lot of people hate grinding. Some people enjoy it. When you’re designing your RPG encounters, it’s important to find a way to keep both groups happy. I’ve played games where grinding is necessary to continue—and that can get very boring. I’ve also played games that take the opposite approach and don’t allow the player to grind (this can happen with enemies that level with the hero, which almost seems to make leveling pointless in the first place).

Typically, you don’t want to force your player (or expect him) to grind—it goes back to the idea of preventing your player from progressing through the game. On the other hand, if a player wants to grind, the game should find a way to reward him for it without breaking the balance of the whole game. 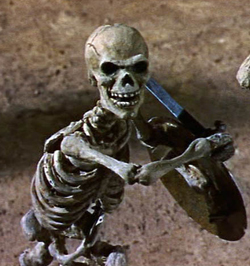 When a player grinds, he does it in order to feel his characters get stronger. He needs a tangible reward, and that typically isn’t just money or item-drops. The reward for a player who likes to grind is to feel the change in battle pace—the enemies fall faster. When you balance a section of your game,  try to build this progression into the enemies so it feels natural. At the beginning of the area, the enemies may be difficult, but at the end, the player should be strong enough to “spam the attack button” and come through unscathed. That is the kind of progression that players look for when they grind, and if you can incorporate that into the natural balance of your enemies, then you should be able to satisfy both groups of players.

Obviously this depends on the mechanics of your game, but as a general rule: the player should feel a significant difference when fighting enemies at the beginning of an area and when fighting the same enemy at the end of the area. Whether you use random encounters, on-map encounters, or something else—it’s going to require some careful balancing and lots of playtesting in order to achieve the perfect “experience ramp” in each area of your game.

What you’re doing wrong: making grinding necessary and/or not making it rewarding.